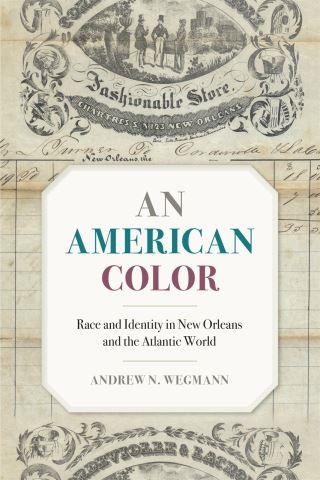 Race and Identity in New Orleans and the Atlantic World

For decades, scholars have conceived of the coastal city of New Orleans as a remarkable outlier, an exception to nearly every “rule” of accepted U.S. historiography. American only by adoption, New Orleans, in most studies, serves as a frontier town of the circum-Caribbean—a vestige of North America’s European colonial era along the southern coast of a foreign, northern, insular United States. Beneath that, too, many have argued, a complex algorithm of racial mixtures was at work well into the nineteenth century, a complexity of racial understanding and treatment that almost every scholar to date has claimed simply did not exist within the more “American” states further north and outside the bounds of the Caribbean’s bizarre socioracial influence.

The reality, as An American Color explains, is that on the surface, New Orleans did have a racial and social system that confounded the more prudent and established black-white binary at work in the social rhetoric of the British-descended states further north. But this was not unique, especially within the United States. As Andrew N. Wegmann argues, New Orleans is representative of a place with different words for the same practices found throughout the North American continent and the Atlantic world. From New Orleans to Charleston and Richmond, the social construction of race remained constant and Atlantic in nature, predicated on a complex, socially infused, multitier system of prescribed racial value that challenged and sometimes abandoned preordained definitions of “black” and “white” for an assortment of fluid but meaningful designations in between. New Orleans is thus an entry point for the study of color in an Atlantic United States.

Andrew N. Wegmann: ANDREW N. WEGMANN is associate professor of history at Delta State University. He is coauthor, with Sara K. Eskridge, of U.S. History: A Top Hat Interactive Text and coeditor, with Robert Englebert, of French Connections: Cultural Mobility in North America and the Atlantic World. A native of New Orleans, he lives in Cleveland, Mississippi.