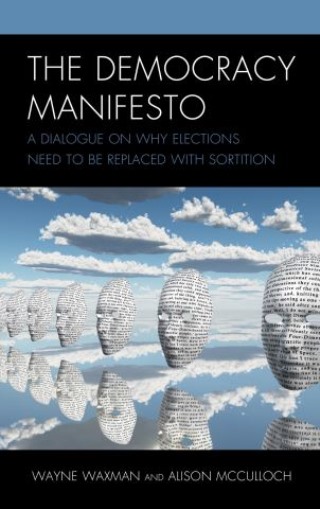 A Dialogue on Why Elections Need to be Replaced with Sortition

The Democracy Manifesto is about how to recreate democracy by replacing elections with government that is truly of, by and for the people. Written in engaging and accessible dialogue form, the book argues that the only truly democratic system of government is one in which decision-makers are selected randomly (by sortition) from the population at large, operating much the way trial juries do today, but 100% online, enabling people to govern together even across great distances. Sortition has a storied history but what sets The Democracy Manifesto apart is its comprehensive account of how it can be implemented not only across all sectors and levels of government, but throughout society as well, including the democratization of mass media, corporations, banks, and other large institutions. The resulting Sortitive Representative Democracy (SRD) is the true heir to ancient Greek democracy, and the only means of ensuring ‘we the people’ are represented by our fellow citizens rather than by the revolving groups of elites that dominate electoral systems. In the process, the book grapples with myriad hot topics including economic issues, international relations, indigenous rights, environmentalism and more.

Alison McCulloch is scholar of philosophy and retired journalist.

Alison McCulloch is scholar of philosophy and retired journalist.