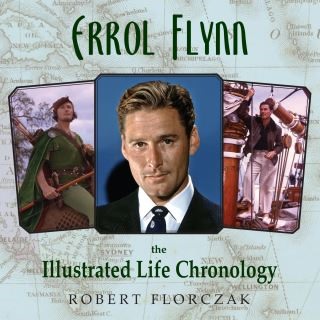 Though there have been myriad books on Errol Flynn - scores of biographies, film studies, analyses, etc. - there has never been one that unfurls his dashing life day-by-day, predominantly through photos, letters, news clippings, and documents. This book does so: from Flynn’s birth in Hobart, Australia in 1909 through to his death in Vancouver, Canada in 1959, with over 1,000 images (many rarely or never before published) culled from Florczak's personal collection of over 11,000. The book is the result of the author’s travels around the world to photograph locations key to Flynn’s life, and with text gathered from years of research in the Warner Bros. Archives, the USC Cinematic Arts Library, and the Margaret Herrick Library. Among other popular day-by-day pictorial biographies are those of Frank Sinatra, Marilyn Monroe, Judy Garland, Ernest Hemingway, Elvis Presley, The Beatles, and Eric Clapton. Flynn’s colorful life was lived out on the world stage and a better candidate for a book of this style would be hard to find.