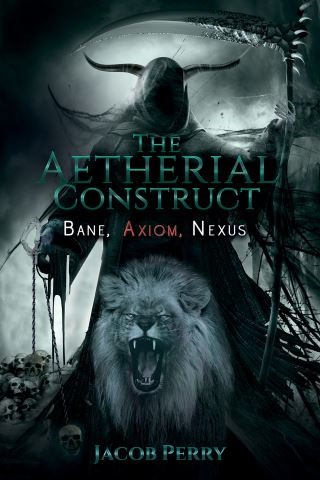 “The universe stood on the edge of annihilation. The patterns threaded thicker and faster, weaving endlessly onto Tahor, drawing the attention of the gods and their chosen beings. It was the start of a cosmic rebirth, the calling for the Aetherial Construct’s re-creation, which would cause a mystical shift, a monumental realignment, bringing a confrontation between the oneness of Ohrumn and the distortions of Tawrohn.
The machinations of Biotech X would arise and challenge the mastering magic of the mages from Torrent Amalga, Gage Enigma would balance it all and the force of creation, Ohrumn the God of Gods, would be recreated. Rarschtor had set it all in motion and Tahor was the centre point for the beginning of the new order.”
The Weavers have cast the fate of Ohrumn, the God of gods.
Rarschtor has caused the unravelling of all.
The chosen aliens, mages and humanoids are gathered, tearing the planet Tahor past the limits of reality.
The Axiom has become Panthera’s heart.
The Sear Blades are seeking their true wielder.
The Mage Lords aim to unify the Weapons of Will.
Hell has arisen.
The Reaper is yearning.
The last of the Mordrakuhlor defy the evil of the Narcheen.
Ruciter’s bane is beyond the need of unfolding.
The Nexus will unite it all as one.
Gage Enigma will manifest.
The Aetherial Construct will destroy the multiverse.

Jacob Perry: Jacob Perry was born in Wollongong, Australia, with a love of the ocean and a passion for imagination, often adrift in daydreams rather than reality. At the age of 14 his father gave him a copy of The Hobbit and an addiction to fantasy rapidly developed. Jacob is an English major and has a soppy book of heartfelt teenage poetry, dedicated to the importance of words, and an overflowing bookshelf of fantasy and sci-fi novels, congealed in the flux of a wandering mind. The stories and characters Jacob brings to life are heavy in emotional content, flowing in the insight of real drama and action. He aims to write you into their lives, as the characters write themselves into yours.