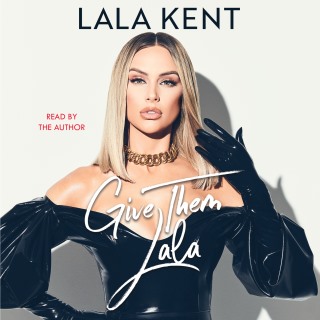 The Vanderpump Rules breakout star and provocateur brings her signature sharp wit to the page with this collection of humorous and brutally honest essays exploring her rocky road to fame, sobriety, and beyond.

What does “Give them Lala” mean? It means giving the truest, most honest version of yourself to the world. It means being authentic, bold, adventurous, and having an unapologetic approach to life.

Hollywood is where Lauren Burningham, aspiring actress from Utah, fully embraced her alter-ego Lala Kent, entrepreneur, entertainer, and film and television star. Some say she’s rude; Lala says she claps back. Some say she’s spontaneous; Lala says “eat up the drama.” Some say she’s too bold; Lala knows she’s reality TV gold. Truth is, without giving them Lala, Lauren could never have become the woman she is today.

In her debut collection of essays, Lala shares how you, too, can embrace the best version of yourself and never feel guilty for deserving more. As she leads us on her bumpy journey from suburban boredom to Hollywood glamour, she’ll explain how women can—and should—feel just as free as men when it comes to sex, how sobriety saved her life and relationship, and how we should treasure every day we have with those we love.

Lala Kent: Lala Kent rose to fame on Bravo’s Vanderpump Rules and has since become a wildly popular media personality. She is the founder of Give Them Lala Beauty and has appeared in films such as The Row, Vault, Axis Sally, and Hard Kill. Give Them Lala is her first book.