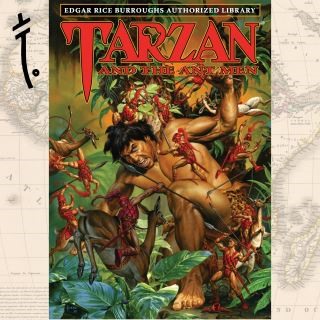 Tarzan and the Ant Men

No man had ever penetrated the Great Thorn Forest until Tarzan of the Apes crashed his plane behind it on his solo flight. Within he finds a beautiful country. But in it lives the Alali, strange Stone Age giants whose women regard all men as less than slaves. And beyond the Alali lies the country of the Ant Men—little people only eighteen inches tall. There, in Trohanadalmakus, Tarzan is an honored guest, until he is captured by the warriors of Veltopismakus in one of the Ant Men’s wars. But unknown to the ape-man, they have plans for him—by the advanced science of the little people, Tarzan is shrunk to their size and set to work as a quarry slave.

The creator of the immortal characters Tarzan of the Apes and John Carter of Mars, Edgar Rice Burroughs is one of the world’s most popular authors. His timeless tales of heroes and heroines transport readers from the jungles of Africa and the dead sea bottoms of Barsoom to the miles-high forests of Amtor and the savage inner world of Pellucidar, and even to alien civilizations Beyond the Farthest Star. Mr. Burroughs’ books are estimated to have sold hundreds of millions of copies, and they have spawned 60 films and 250 television episodes.