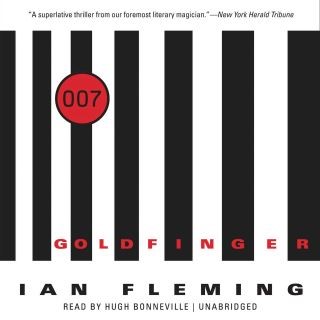 A game of canasta turns out crooked, and a golden girl ends up dead. It seems that Auric Goldfinger is a bad loser when it comes to cards. He's also the world's most ruthless and successful gold smuggler. As James Bond follows his trail, he discovers that Goldfinger's real game is the heist of fifteen billion dollars of US government bullion. The final hand is played at Fort Knox, in a spectacular display of deception and intrigue.

This audiobook includes an exclusive bonus interview with Hugh Bonneville.

Ian Fleming (1908–1964) was born in London and educated at Eton and Sandhurst. During World War II, he served in British Naval Intelligence, playing a key role in shaping the prototype CIA. His wide-ranging, fast-paced life would provide the backdrop for his beloved spy novels featuring the perennially charming James Bond.