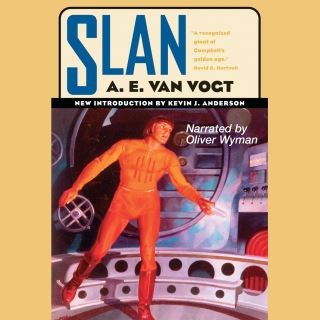 Jommy Cross is a slan, a genetically bred superhuman whose race was created to aid humanity but is now despised by normal humans. Slans are usually shot on sight, but that doesn’t stop Jommy’s mother from bringing him to see the world capital of Centropolis, the seat of power for Earth’s dictator, Kier Gray. But on their latest trip to Centropolis, the two slans are discovered, and Jommy’s mother is killed. Jommy, only nine years old, unwittingly becomes caught up in a plot to undermine Gray, who may be more sympathetic to slans than the public suspects. The nonstop action and root-for-the-underdog plot has made Slan a science fiction favorite.

A. E. van Vogt (1912–2000) was a SFWA Grand Master. Part of John W. Campbell’s stable of writers for Astounding Science-Fiction magazine, van Vogt was one of the most prolific, yet complex, writers of the genre’s mid-twentieth century golden age. He is often named, along with Isaac Asimov and Robert A. Heinlein, one of the top science fiction writers of all time.