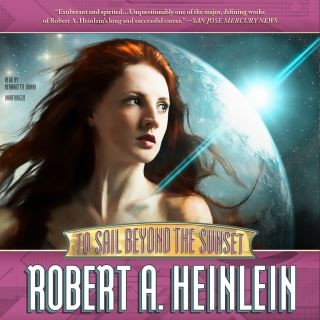 To Sail beyond the Sunset

Maureen Johnson, the somewhat irregular mother of Lazarus Long, wakes up in bed with a man and a cat. The cat is Pixel, well-known to fans of the New York Times bestseller The Cat Who Walks through Walls. The man is a stranger to her, and besides that, he is dead.

So begins Robert A. Heinlein’s To Sail beyond the Sunset. Filled with the master’s most beloved characters, this compelling work broadens and enriches his epic vision of time and space, life and death, love and desire. It is also an autobiographical masterpiece—and a wondrous return to the alternate universes that all Heinlein fans have come to know and love.

Robert A. Heinlein: Robert A Heinlein is considered one of the Big Three of classic science fiction (along with Isaac Asimov and Arthur C. Clarke). Heinlein is a seven-time Hugo Award recipient and was given the first Grand Master Nebula Award for lifetime achievement. Heinlein’s juveniles alone have influenced generations of scientists, engineers and creators the world over (for instance, it was once estimated that everyone in the Apollo 11 mission control room had read and loved at least one Heinlein novel). His worldwide bestsellers include Have Space Suit — Will Travel, Stranger in a Strange Land, Starship Troopers, Time Enough for Love, and The Moon Is a Harsh Mistress.