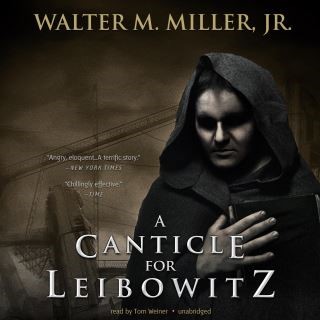 A Canticle for Leibowitz

Winner of the 1961 Hugo Award for Best Novel and widely considered one of the most accomplished, powerful, and enduring classics of modern speculative fiction, Walter M. Miller’s A Canticle for Leibowitz is a true landmark of twentieth-century literature—a chilling and still-provocative look at a postapocalyptic future.

In a nightmarish, ruined world, slowly awakening to the light after sleeping in darkness, the infantile rediscoveries of science are secretly nourished by cloistered monks dedicated to the study and preservation of the relics and writings of the blessed Saint Isaac Leibowitz. From here the story spans centuries of ignorance, violence, and barbarism, viewing through a sharp, satirical eye the relentless progression of a human race damned by its inherent humanness to recelebrate its grand foibles and repeat its grievous mistakes. Seriously funny, stunning, tragic, eternally fresh, imaginative, and altogether remarkable, A Canticle for Leibowitz retains its ability to enthrall and amaze. It is now, as it always has been, a masterpiece.

Walter M. Miller, Jr., (1923–1996) grew up in the American South and enlisted in the Army Air Corps a month after Pearl Harbor. He spent most of World War II as a radio operator and tail gunner, participating in more than fifty-five combat sorties, among them the controversial destruction of the Benedictine abbey at Monte Cassino, the oldest monastery in the Western world. Fifteen years later he wrote A Canticle for Leibowitz. The sequel, Saint Leibowitz and the Wild Horse Woman, published posthumously and completed by a different author, followed nearly forty years later.