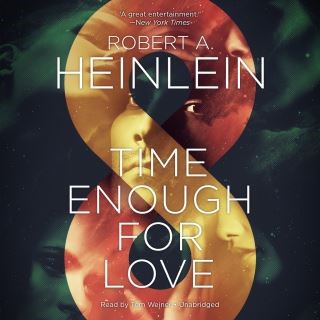 The Lives of Lazarus Long

Time Enough for Love is the capstone and crowning achievement of Heinlein’s famous Future History series.

Lazarus Long is so in love with life that he simply refuses to die. Born in the early 1900s, he lives through multiple centuries, his love for time ultimately causing him to become his own ancestor. Time Enough for Love is his lovingly detailed account of his journey through a vast and magnificent timescape of centuries and worlds. Using the voice of Lazarus, Heinlein expounds his own philosophies, including his radical ideas on sexual freedom. His use of slang, technical jargon, sharp wit, and clever understatement lend this story a texture and authority that seems the very tone of things to come.

Robert A. Heinlein: Robert A. Heinlein (1907–1988) is widely recognized as one of the greatest science fiction authors of all time, a status confirmed in 1974 when the Science Fiction and Fantasy Writers of America gave him their first Grand Master Award for lifetime achievement. A four-time Hugo Award winner, Heinlein is best known for works including Starship Troopers, The Moon Is a Harsh Mistress, and the sensational bestseller Stranger in a Strange Land.