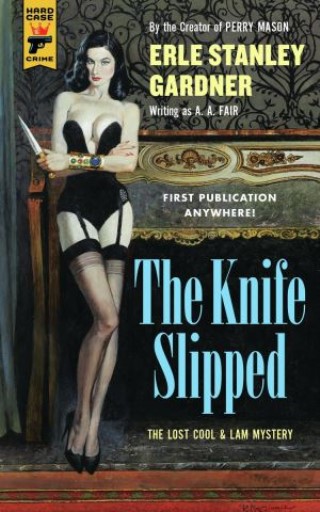 Lost for more than 75 years, The Knife Slipped was meant to be the second book in the series, but shelved when Gardner’s publisher objected to (among other things) Bertha Cool’s tendency to “talk tough, swear, smoke cigarettes, and try to gyp people.” But this tale of adultery and corruption, of double-crosses and triple identities—however shocking for 1939—shines today as a glorious present from the past, a return to the heyday of private eyes and shady dames, of powerful criminals, crooked cops, blazing dialogue, and delicious plot twists.

Erle Stanley Gardner: One of the best-selling authors of all time, Erle Stanley Gardner’s greatest creations include crusading attorney Perry Mason (star of more than eighty novels, a long-running TV series and TV movies) and the hardboiled detective team of Bertha Cool and Donald Lam, who appeared in more than two dozen adventures of their own. An attorney himself, Gardner also founded the Court of Last Resort, a group that investigated criminal cases they believed had ended in wrong convictions.