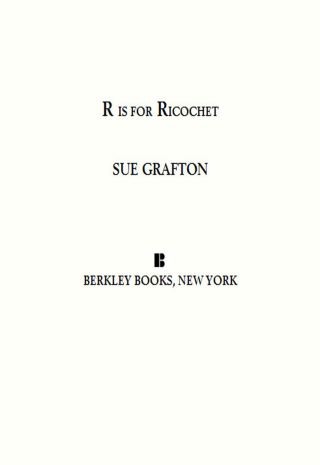 R Is For Ricochet

In this #1 New York Times bestseller in Sue Grafton's Alphabet series, private investigator Kinsey Millhone has her hands full when a job that should be easy money takes a turn for the worse.

Reba Lafferty was a daughter of privilege, the only child of an adoring father. Nord Lafferty was already in his fifties when Reba was born, and he could deny her nothing. Over the years, he quietly settled her many scrapes with the law, but wasn't there for her when she was convicted of embezzlement and sent to the California Institution for Women. Now, at thirty-two, she's about to be paroled, having served twenty-two months of a four-year sentence. Her father wants to be sure Reba stays straight, stays home and away from the drugs, the booze, and the gamblers...

It seems a straightforward assignment for Kinsey: babysit Reba until she settles in, make sure she follows all the niceties of her parole. Maybe a week’s work. Nothing untoward—the woman seems remorseful and friendly. And the money is good.

But life is never that simple, and Reba is out of prison less than twenty-four hours when one of her old crowd comes circling round...

Sue Grafton: #1 New York Times bestselling author Sue Grafton first introduced Kinsey Millhone in the Alphabet Series in 1982. Soon after, both writer and heroine became icons and international bestsellers. Ms. Grafton was a writer who consistently broke the bonds of genre while never writing the same book twice. Named a Grand Master by the Mystery Writers of America, her awards and honors included the Lifetime Achievement Award from the Private Eye Writers of America, the Ross Macdonald Literary Award, the Cartier Diamond Dagger Award from Britain's Crime Writers' Association, the Lifetime Achievement Award from Malice Domestic, a Lifetime Achievement Award from Bouchercon, three Shamus Awards, and three Anthony Awards—including the first two ever awarded. She passed away in December 2017.