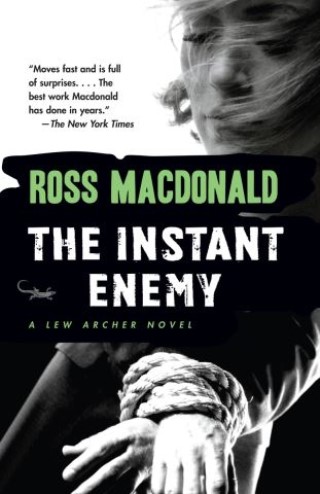 Generations of murder, greed and deception come home to roost in time for the most shocking conclusion ever in a Lew Archer novel. At first glance, it's an open-and-shut missing persons case: a headstrong daughter has run off to be with her hothead juvenile delinquent boyfriend. That is until this bush-league Bonnie & Clyde kidnap Stephen Hackett, a local millionaire industrialist. Now, Archer is offered a cool 100 Gs for his safe return by his coquettish heiress mother who has her own mysterious ties to this disturbed duo. But the deeper Archer digs, the more he realizes that nothing is as it seems and everything is questionable. Is the boyfriend a psycho ex-con with murder on the brain or a damaged youngster trying to straighten out his twisted family tree? And is the daughter simply his nympho sex-kitten companion in crime or really a fragile kid, trying to block out horrific memories of bad acid and an unspeakable sex crime?

Ross Macdonald: Ross Macdonald's real name was Kenneth Millar. Born near San Francisco in 1915 and raised in Ontario, Millar returned to the U.S. as a young man and published his first novel in 1944. He served as the president of the Mystery Writers of America and was awarded their Grand Master Award as well as the Mystery Writers of Great Britain's Gold Dagger Award. He died in 1983.