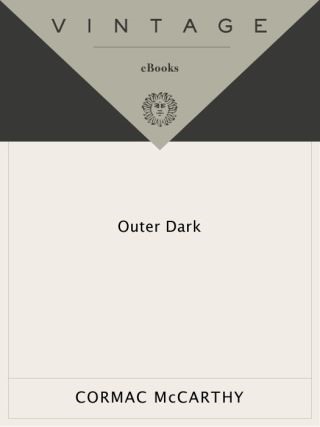 Outer Dark is a novel at once fabular and starkly evocative, set is an unspecified place in Appalachia, sometime around the turn of the century.  A woman bears her brother's child, a boy; he leaves the baby in the woods and tells her he died of natural causes.  Discovering her brother's lie, she sets forth alone to find her son.  Both brother and sister wander separately through a countryside being scourged by three terrifying and elusive strangers, headlong toward an eerie, apocalyptic resolution.

Cormac McCarthy: Cormac McCarthy was born in Rhode Island in1933 and spent most of his childhood near Knoxville, Tennessee. He served in the U.S. Air Force and later studied at the University of Tennessee. In 1976 he moved to El Paso, Texas, where he lives today.  McCarthy's fiction parallels his movement from the Southeast to the West--the first four novels being set in Tennessee, the last three in the Southwest and Mexico. The Orchard Keeper (1965) won the Faulkner Award for a first novel; it was followed by Outer Dark (1968),  Child of God (1973), Suttree (1979), Blood Meridian (1985), All the Pretty Horses, which won both the National Book Critics Circle Award and the National Book Award for fiction in 1992, and The Crossing.