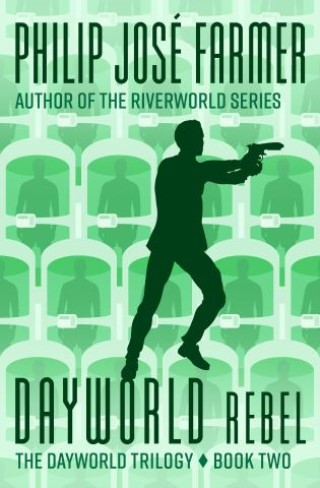 A daybreaker rebels on an overpopulated planet in this dystopian adventure by the author of the World of Tiers series.

Jeff Caird was once a daybreaker: a criminal who avoided government-required suspended animation by living seven different identities. Now he goes by the name William St.-George Duncan, and he’s suppressed the memory of his past, and even his real identity, in order to avoid harsh punishment by the government of the Organic Commonwealth of Earth. But the danger is far from over, and the authorities continue to hunt him—because among the things he’s forgotten there’s something very important . . .

In the wilderness of northern New Jersey, Dunc has fallen in with a group of rebel daybreakers. As he struggles to retrieve the memory that’s so valuable—and dangerous—to the government, he learns from his new allies that there’s a larger movement to break free from the control of the corrupt World Council that limits citizens to one day of consciousness per week. And the knowledge buried deep within him may be the key to their success.

Hugo award–winning Science Fiction Grand Master Philip José Farmer returns to the Dayworld universe for the second installment of his richly imagined trilogy, in which Earth’s overpopulation has led to the most stringent government restrictions on personal freedom imaginable.