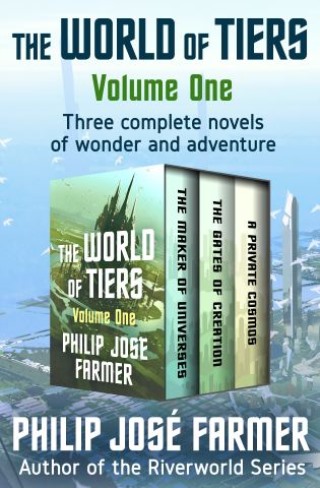 The World of Tiers Volume One

The Maker of Universes, The Gates of Creation, and A Private Cosmos

The first three adventures set in the amazing realm created by the Hugo Award–winning author of Riverworld and “an excellent science fiction writer” (Isaac Asimov).

His past a mystery and his present unbearably mundane, Robert Wolff is simply trying to buy a new house in Arizona when he stumbles upon a secret doorway through space and time and enters the World of Tiers. Made up of ascending levels of jungles, plains, medieval cities, and, at the top, a Garden of Eden, and populated by fantastical creatures, from nymphs and centaurs to merpeople and strange amalgams nonexistent on Earth, it’s beyond anything Wolff could have imagined in his previous humdrum existence. And when his youth is restored in the bargain, it seems he’s truly found paradise.

But there are dark forces in this new world, and Wolff is plunged into an epic quest up through the tiers, accompanied by Paul Janus Finnegan, another earthling, now known as Kickaha. Wolff’s journey to find Jadawin, the Lord of this world, will lead to answers about his own identity—and determine his fate.

Wolff and Kickaha will face off against feuding Lords—who hold the power to control private worlds of their own design—and the depraved Bellers. Devices originally created in the biolabs of the Lords, the Bellers are now conscious entities waging war on the Lords and their “pocket universes.” As they infiltrate the bodies of creatures throughout the World of Tiers and hunt down the Earth-born, the survival of all the worlds hinges upon the battle between the strangers from Earth and enemies disguised as their allies.