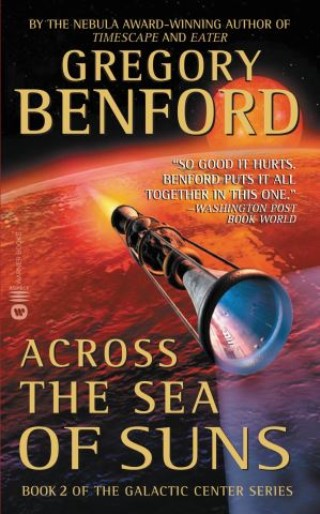 Across the Sea of Suns

From the Nebula Award-winning author comes a newly revised edition of this story in his classic Galactic Center series.

2076: Technology has propelled the world into a new age of enlightenment. Nigel (from In the Ocean of Night) has left Earth to explore space for alien life. But while on this captivating mission, humanity's birthplace has fallen prey to attack and its seas are seeded with alien lifeforms. Now, Nigel is left to search for the only savior he knows-the one who saved him once before-the alien machine called the "Snark." Having left the solar system and turned traitor to its alien masters, Nigel is unsure of the Snark's new allegiance. Is the Snark a friend? Or will it also turn on Nigel... proving to be a deadly foe?

Gregory Benford:
Gregory Benford is a professor of physics at the University of California at Irvine, and he is the recipient of two Nebula Awards, the United Nations Prize for Literature, and the 1995 Lord Prize for his contributions to science, among many other honors.