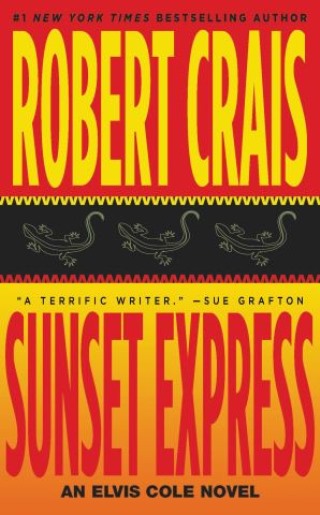 When a wealthy entrepreneur is accused of murder in Los Angeles, wisecracking private eye Elvis Cole is hired to prove that the evidence was corrupted and becomes suspicious about the defense attorney's motivations. Prominent restaurateur Teddy Martin is facing charges in his wife's brutal murder. But he's not going down without spending a bundle of cash on his defense. So his hotshot attorney hires P.I. Elvis Cole to find proof that Detective Angela Rossi tampered with the evidence. Detective Rossi needs a way back to the fast track after falling hard during an internal investigation five years ago. But Cole needs to know if she's desperate enough to falsify the case against Martin in order to secure her own position. As Cole and his partner Joe Pike work their way through a tangle of witnesses and an even greater tangle of media, they begin to suspect that it's not the police who are behind the setup. The sixth book in the Elvis Cole series, Sunset Express is marked by Robert Crais's dark humor and edge-of-your-seat suspense.

Robert Crais: Robert Crais lives in Los Angeles and is the author of many New York Times bestsellers, including The First Rule, The Sentry, the #1 bestseller Taken, and Suspect. In 2014 the Mystery Writers of America honored Robert Crais with the Grand Master Award.