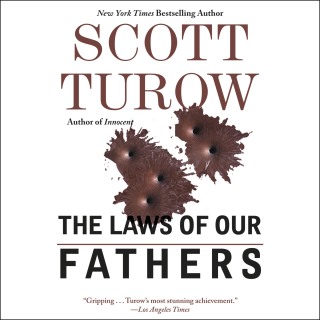 The Laws of Our Fathers

In Kindle County, a woman is killed in an apparent random drive-by shooting. The woman turns out to be the ex-wife of a prominent state senator and an old acquaintance of Judge Sonia Klonsky, on whose desk the case lands. As the pursuit of justice takes bizarre and unusual turns, Judge Klonsky is brought face-to-face with a host of extraordinary personalities and formidable enemies bent on her destruction.

Scott Turow: Scott Turow is the author of many bestselling works of fiction, including Testimony, Identical, Innocent, Presumed Innocent, and The Burden of Proof, and two nonfiction books, including One L, about his experience as a law student. His books have been translated into more than forty languages, sold more than thirty million copies worldwide, and have been adapted into movies and television projects. He has frequently contributed essays and op-ed pieces to publications such as the New York Times, Washington Post, Vanity Fair, The New Yorker, and The Atlantic.