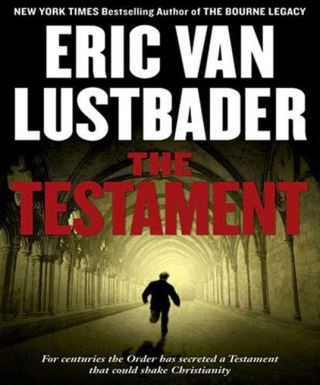 Braverman Shaw—"Bravo" to his friends—always knew his father had secrets. But not until Dexter Shaw dies does Bravo discover that his father belonged to the Order of Gnostic Observatines, a hidden sect long believed to be extinct. For centuries, the Order has guarded a lost Testament that could shake Christianity to its foundations. Dexter Shaw was the latest Keeper of the Testament—and Bravo is his chosen successor.

To find the Testament, Bravo, a medieval scholar and cryptanalyst, must follow the clues his father left behind. His companion in this quest is Jenny Logan, a woman he barely knows. Jenny is a Guardian, assigned by the Order to protect Bravo, or so she claims. Bravo soon learns that he can trust no one where the Testament is concerned, perhaps not even Jenny....

Eric Van Lustbader: Eric Van Lustbader is the author of numerous bestselling thrillers, including Last Snow, First Daughter, Blood Trust, The Bourne Legacy, The Bourne Dominion and The Ninja and The Pearl series. His books have been translated into over twenty languages. Born and raised in Greenwich Village in New York City, Lustbader worked in the New York public school system and in the music business before turning to writing full-time. He lives in Manhattan and on the South Fork of Long Island with his wife, Victoria, who is also an accomplished author.Eric Conger has narrated more than 80 audiobooks, and AudioFile magazine has called him "...simply the best. With no self-consciousness or discernable vocal flaws, his energy and emotional investment are consistent start to finish."  Conger has worked on a number of audiobooks that have garnered Earphones Awards, including William D. Novelli and Boe Workman's 50+ and Frederick Forsyth's Avenger, both published by Macmillan Audio.  Eric is a graduate of Wesleyan University and the University of Paris.  He's appeared in over 50 plays and has also translated plays of Moliere and Feydeau for regional theaters.  His voiceover work is extensive, and he's produced over 5,200 narrations for commercial ventures. He works primarily from his home studio in Weehawken, NJ, where he lives with his wife Gayle and two children.