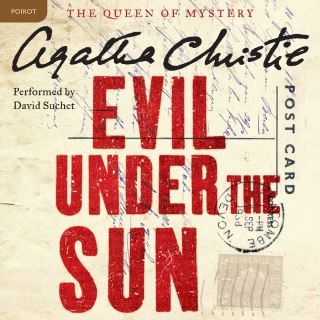 Evil Under the Sun

The classic Evil Under the Sun, one of the most famous of Agatha Christie’s Poirot investigations, has the fastidious sleuth on the trail of the killer of a sun-bronzed beauty whose death brings some rather shocking secrets into the light.

The beautiful bronzed body of Arlena Stuart lay face down on the beach. But strangely, there was no sun and Arlena was not sunbathing…she had been strangled.

Ever since Arlena’s arrival the air had been thick with sexual tension. Each of the guests had a motive to kill her, including Arlena’s new husband. But Hercule Poirot suspects that this apparent “crime of passion” conceals something much more evil.

David Suchet, famed as TV's Hercule Poirot, has starred with the RSC, on London's West End and on Broadway, winning four Olivier nominations and a Tony® nomination. He has starred in numerous films and is director of the Old Vic Theatre, and a member of the Trust Council of the Royal Shakespeare Theatre.