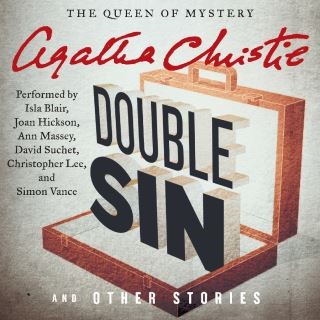 Double Sin and Other Stories

Miss Marple and Hercule Poirot both make appearances in Agatha Christie’s Double Sin and Other Stories, a sterling collection of short mystery fiction that offers double the suspense, surprise, and fun.

In one of London’s most elegant shops, a decorative doll dressed in green velvet adopts some rather human, and rather sinister, traits.

A country gentleman is questioned about a murder yet to be committed.

While summoning spirits, a medium is drawn closer to the world of the dead than she ever dared imagine possible.

In a small country church, a dying man’s last word becomes both an elegy and a clue to a crime.

These chilling stories, and more, cleverly wrought by master Agatha Christie and solved by the inimitable Hercule Poirot and Miss Jane Marple.

David Suchet, famed as TV's Hercule Poirot, has starred with the RSC, on London's West End and on Broadway, winning four Olivier nominations and a Tony® nomination. He has starred in numerous films and is director of the Old Vic Theatre, and a member of the Trust Council of the Royal Shakespeare Theatre.