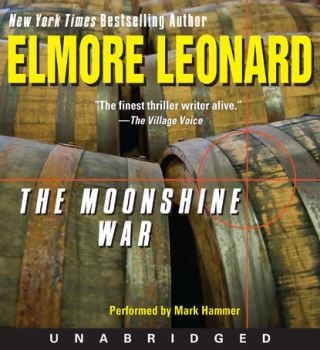 “Leonard is tops in his field.”
—New Orleans Times-Picayune

The great Elmore Leonard, “America’s pre-eminent crime fiction writer” (Chicago Tribune), takes readers back to Prohibition days in the back hills of Kentucky in a rollicking story of guns, greed, and illegally brewed corn liquor. The Moonshine War is a tale of the chaos that ensues when a gang of city slickers sets out to steal thousands of dollars-worth of homemade whiskey from a hell-raising country boy—who is anything but the easy mark they were expecting. A rediscovered Elmore Leonard classic, The Moonshine War is a wild ride bursting with the author’s hallmark delights: the twisty plot, the gripping suspense, the wit and, of course, the razor-sharp dialogue. It’s no wonder that the creator of U.S. Marshal Raylan Givens—lately the star of the hit TV series Justified—is always listed among the mystery and crime fiction elite, including John D. MacDonald, Dashiell Hammett, James M. Cain, and Robert Parker, and often at the very top of the list.