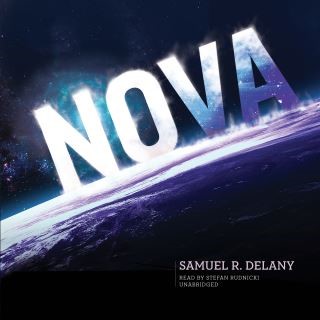 Given that the suns of Draco stretch almost sixteen light years from end to end, it stands to reason that the cost of transportation is the most important factor driving the thirty-second century. And since Illyrion is the element most needed for space travel, Lorq von Ray is plenty willing to fly through the core of a recently imploded sun in order to obtain seven tons of it. The potential for profit is so great that Lorq has little difficulty cobbling together an alluring crew, including a gypsy musician and a moon-obsessed scholar interested in the ancient art of writing a novel. What the crew doesn’t know is that Lorq’s quest is actually fueled by a private revenge so consuming that he’ll stop at nothing to achieve it.

In the grandest manner of speculative fiction, Nova is a wise and witty classic that casts a fascinating new light on some of humanity’s oldest truths and enduring myths.

Claire Bloom, CBE, is an English film and stage actress, known for leading roles in plays such as Streetcar Named Desire, A Doll's House, and Long Day's Journey into Night, along with nearly sixty films and countless television roles, during a career spanning over six decades. She was appointed Commander of the Order of the British Empire in the 2013 Queen's birthday honors for services to drama.

Stefan Rudnicki first became involved with audiobooks in 1994. Now a Grammy-winning audiobook producer, he has worked on more than three thousand audiobooks as a narrator, writer, producer, or director. He has narrated more than three hundred audiobooks. A recipient of multiple AudioFile Earphones Awards, he was presented the coveted Audie Award for solo narration in 2005, 2007, and 2014, and was named one of AudioFile's Golden Voices in 2012.