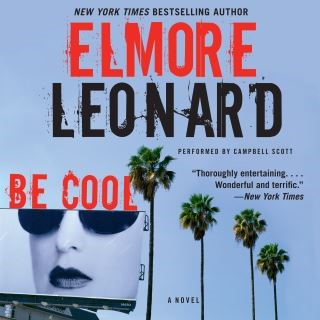 Get Shorty’s Chili Palmer is back in Be Cool, a classic novel of suspense from New York Times bestselling author Elmore Leonard. But this time it’s no more Mr. Nice Guy.

After a smash hit and a flop, B-movie-producer Chili Palmer is looking for another score. Lunching with a record company executive, Chili's exploring a hot new idea—until the exec, a former "associate" from Chili's Brooklyn days, gets whacked.

Segue from real life to reel life. Chili's found his plot. It's a slam-bang opener: the rubout of a record company mogul. Cut to an ambitious wannabe singer named Linda Moon. She has attitude and a band. She's perfect. Zoom in to reality. Linda's manager thinks Chili's poaching and he's out to get even, with the help of his switch-hitting Samoan bodyguard.

But somebody else beat them to the punch, as Chili discovers when he gets home and finds a corpse at his desk. Somebody made a mistake...

Campbell Scott studied with Stella Adler and Geraldine Page, and appeared on Broadway in Long Day's Journey into Night, among other productions. His many films include Longtime Companion, Singles, Music and Lyrics, and Big Night, which he co-directed.