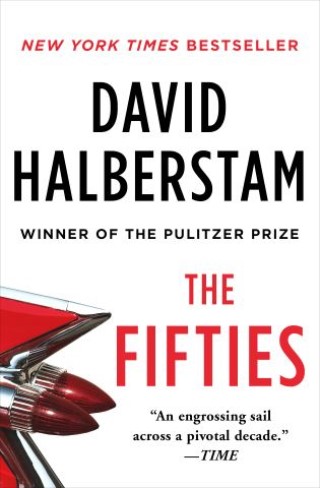 This vivid New York Times bestseller about 1950s America from a Pulitzer Prize–winning journalist is “an engrossing sail across a pivotal decade” (Time).

Joe McCarthy. Marilyn Monroe. The H-bomb. Ozzie and Harriet. Elvis. Civil rights. It’s undeniable: The fifties were a defining decade for America, complete with sweeping cultural change and political upheaval. This decade is also the focus of David Halberstam’s triumphant The Fifties, which stands as an enduring classic and was an instant New York Times bestseller upon its publication. More than a survey of the decade, it is a masterfully woven examination of far-reaching change, from the unexpected popularity of Holiday Inn to the marketing savvy behind McDonald’s expansion. A meditation on the staggering influence of image and rhetoric, The Fifties is vintage Halberstam, who was hailed by the Denver Post as “a lively, graceful writer who makes you . . . understand how much of our time was born in those years.”
This ebook features an extended biography of David Halberstam.

David Halberstam:
David Halberstam (1934–2007) was a Pulitzer Prize–winning journalist and bestselling author. He is best known for his brazen coverage of the Vietnam War for the New York Times and for his twenty-one nonfiction books, which cover a wide array of topics such as the plight of Detroit and the auto industry, and the incomparable success of Michael Jordan. The recipient of the Mailer Prize for distinguished journalism, Halberstam wrote for numerous publications throughout his career and, according to journalist George Packer, single-handedly set the standard of “the reporter as fearless truth teller.” Halberstam died in 2007.