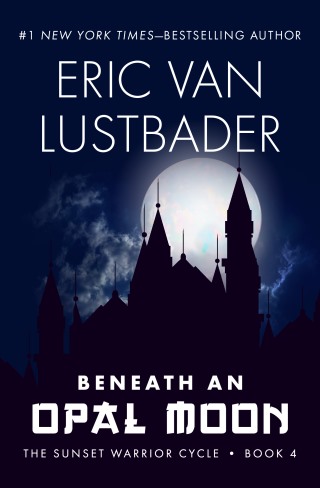 Beneath an Opal Moon

Home is calling to Moichi Annai-Nin the navigator, oath-brother to the great Dai-San. But a series of horrific deaths in Sha’angh’sei have tied him indefinitely to this land, and justice must be served before he can set sail for the place where his heart truly dwells. A strange destiny awaits Moichi at the Circus of Souls—a treasure and a curse beyond all imagining—as he joins forces with Chiisai, the bewitching and beautiful Bujun warrior, on a perilous enterprise of rescue and vengeance that will carry them both to the ends of the world. For beyond all human boundaries, in the mysterious land of the opal moon, an unthinkable evil is on the rise—and a mad sorceress will not rest until she gains the awesome power to unleash nightmares on the earth.

Beneath an Opal Moon is the fourth book in bestselling author Eric Van Lustbader’s acclaimed Sunset Warrior Cycle, an epic adventure that unfolds in a remarkable fantasy world forever transformed by world-shattering disaster. An ingenious literary invention that boldly transcends genre borders, this is a breathtaking tale of honor and duty, spirit and sorcery, murder and madness.