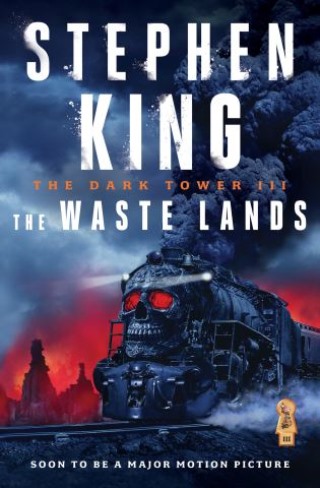 The third volume in the #1 nationally bestselling Dark Tower Series, involving the enigmatic Roland (the last gunfighter) and his ongoing quest for the Dark Tower, is “Stephen King at his best” (School Library Journal).

Several months have passed since The Drawing of the Three, and in The Waste Lands, Roland’s two new tet-mates have become trained gunslingers. Eddie Dean has given up heroin, and Odetta’s two selves have joined, becoming the stronger and more balanced personality of Susannah Dean. But Roland altered ka by saving the life of Jake Chambers, a boy who—in Roland’s world—has already died. Now Roland and Jake exist in different worlds, but they are joined by the same madness: the paradox of double memories. Roland, Susannah, and Eddie must draw Jake into Mid-World and then follow the Path of the Beam all the way to the Dark Tower. There are new evils…new dangers to threaten Roland’s little band in the devastated city of Lud and the surrounding wastelands, as well as horrific confrontations with Blaine the Mono, the piratical Gasher, and the frightening Tick-Tock Man.

The Dark Tower Series continues to show Stephen King as a master of his craft. What lands, what peoples has he visited that are so unreachable to us except in the pages of his incredible books? Now Roland’s strange odyssey continues. The Waste Lands follows The Gunslinger and The Drawing of the Three as the third volume in what may be the most extraordinary and imaginative cycle of tales in the English language.

Stephen King: Stephen King is the author of more than sixty books, all of them worldwide bestsellers. His recent work includes Billy Summers, If It Bleeds, The Institute, Elevation, The Outsider, Sleeping Beauties (cowritten with his son Owen King), and the Bill Hodges trilogy: End of Watch, Finders Keepers, and Mr. Mercedes (an Edgar Award winner for Best Novel and a television series streaming on Peacock). His novel 11/22/63 was named a top ten book of 2011 by The New York Times Book Review and won the Los Angeles Times Book Prize for Mystery/Thriller. His epic works The Dark Tower, It, Pet Sematary, and Doctor Sleep are the basis for major motion pictures, with It now the highest-grossing horror film of all time. He is the recipient of the 2020 Audio Publishers Association Lifetime Achievement Award, the 2018 PEN America Literary Service Award, the 2014 National Medal of Arts, and the 2003 National Book Foundation Medal for Distinguished Contribution to American Letters. He lives in Bangor, Maine, with his wife, novelist Tabitha King.