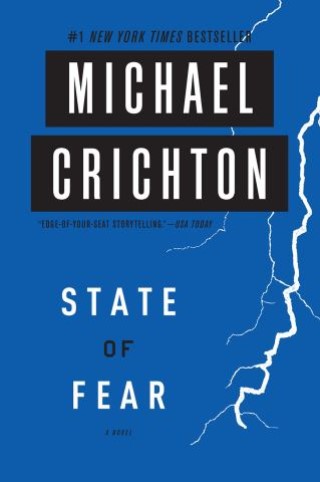 When a group of eco-terrorists engage in a global conspiracy to generate weather-related natural disasters, its up to environmental lawyer Peter Evans and his team to uncover the subterfuge.

From Tokyo to Los Angeles, from Antarctica to the Solomon Islands, Michael Crichton mixes cutting edge science and action-packed adventure, leading readers on an edge-of-your-seat ride while offering up a thought-provoking commentary on the issue of global warming. A deftly-crafted novel, in true Crichton style, State of Fear is an exciting, stunning tale that not only entertains and educates, but will make you think.

Michael Crichton (1942-2008) was the author of the bestselling novels The Terminal Man, The Great Train Robbery, Jurassic Park, Sphere, Disclosure, Prey, State of Fear, Next and Dragon Teeth, among many others. His books have sold more than 200 million copies worldwide, have been translated into forty languages, and have provided the basis for fifteen feature films. He wrote and directed Westworld, The Great Train Robbery, Runaway, Looker, Coma and created the hit television series ER. Crichton remains the only writer to have a number one book, movie, and TV show in the same year.

Daniel H. Wilson is a Cherokee citizen and author of the New York Times bestselling Robopocalypse and its sequel Robogenesis, as well as ten other books. He recently wrote the Earth 2: Society comic book series for DC Comics. Wilson earned a PhD in Robotics from Carnegie Mellon University, as well as master’s degrees in Artificial Intelligence and Robotics. He has published over a dozen scientific papers and holds four patents. Wilson lives in Portland, Oregon.