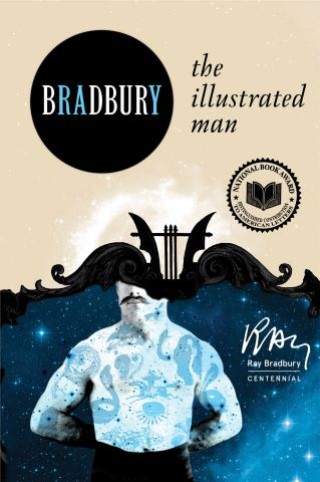 You could hear the voices murmuring, small and muted, from the crowds that inhabited his body.

A peerless American storyteller, Ray Bradbury brings wonders alive. The Illustrated Man is classic Bradbury— eighteen startling visions of humankind’s destiny, unfolding across a canvas of decorated skin. In this phantasmagoric sideshow, living cities take their vengeance, technology awakens the most primal natural instincts, Martian invasions are foiled by the good life and the glad hand, and dreams are carried aloft in junkyard rockets. Provocative and powerful, Ray Bradbury’s The Illustrated Man is a kaleidoscopic blending of magic, imagination, and truth—as exhilarating as interplanetary travel, as maddening as a walk in a million-year rain, and as comforting as simple, familiar rituals on the last night of the world.

In a career spanning more than seventy years, Ray Bradbury inspired generations of readers to dream, think, and create. A prolific author of hundreds of short stories and close to fifty books, as well as numerous poems, essays, operas, plays, and screenplays, Bradbury was one of the most celebrated writers of our time. His groundbreaking works include Fahrenheit 451, The Martian Chronicles, The Illustrated Man, Dandelion Wine, and Something Wicked This Way Comes. An Emmy Award winner for his teleplay The Halloween Tree and an Academy Award nominee, he was the recipient of the 2000 National Book Foundation Medal for Distinguished Contribution to American Letters, the 2004 National Medal of Arts, and the 2007 Pulitzer Prize Special Citation, among many honors.