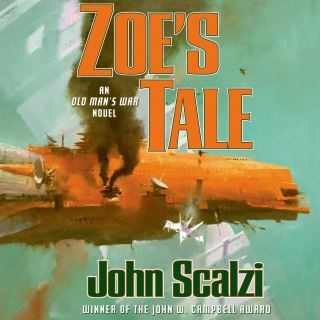 How do you tell your part in the biggest tale in history?

I ask because it's what I have to do. I'm Zoe Boutin Perry: A colonist stranded on a deadly pioneer world. Holy icon to a race of aliens. A player (and a pawn) in a interstellar chess match to save humanity, or to see it fall. Witness to history. Friend. Daughter. Human. Seventeen years old.

Everyone on Earth knows the tale I am part of. But you don't know my tale: How I did what I did — how I did what I had to do — not just to stay alive but to keep you alive, too. All of you. I'm going to tell it to you now, the only way I know how: not straight but true, the whole thing, to try make you feel what I felt: the joy and terror and uncertainty, panic and wonder, despair and hope. Everything that happened, bringing us to Earth, and Earth out of its captivity. All through my eyes.

It's a story you know. But you don't know it all.

John Scalzi: John Scalzi won the 2006 John W. Campbell Award for Best New Writer, the 2013 Hugo Award for Best Novel for Redshirts, and his debut novel Old Man’s War was a finalist for Hugo Award as well. His other books include The Ghost Brigades, The Android’s Dream, The Last Colony and The Human Division. He has won the Romantic Times Reviewers Choice Award for science-fiction, the Seiun, The Kurd Lasswitz and the Geffen awards. His weblog, The Whatever, is one of the most widely-read web sites in modern SF. Born and raised in California, Scalzi studied at the University of Chicago. He lives in southern Ohio with his wife and daughter.Tavia Gilbert has recorded hundreds of titles across a wide span of genres, including Erica Spindler romantic thrillers, John Scalzi science fiction, Jeaniene Frost fantasy.  She received four Audies nominations and won three Audiofile Earphones Awards for titles The Obituary Writer, Sing Them Home and The Day of the Pelican.  In addition to voice acting, Gilbert is an accomplished producer, singer and theater actor.