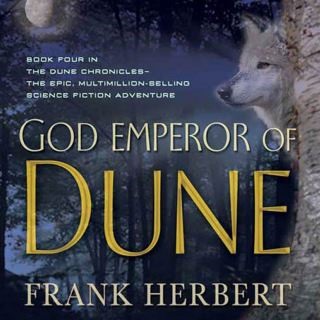 Book Four in the Dune Chronicles

More than three thousand years have passed since the first events recorded in Frank Herbert's DUNE. Only one link survives with those tumultuous times: the grotesque figure of Leto Atreides, son of the prophet Paul Muad'Dib, and now the virtually immortal God Emperor of Dune. He alone understands the future, and he knows with a terrible certainty that the evolution of his race is at an end unless he can breed new qualities into his species. But to achieve his final victory, Leto Atreides must also bring about his own downfall . . .

Scott Brick first began narrating audiobooks in 2000, and after recording almost 400 titles in five years, AudioFile magazine named Brick a Golden Voice and “one of the fastest-rising stars in the audiobook galaxy.” He has read a number of titles in Frank Herbert’s bestselling Dune series, and he won the 2003 Science Fiction Audie Award for Dune: The Butlerian Jihad. Brick has narrated for many popular authors, including Michael Pollan, Joseph Finder, Tom Clancy, and Ayn Rand. He has also won over 40 AudioFile Earphones Awards and the AudioFile award for Best Voice in Mystery and Suspense 2011. In 2007, Brick was named Publishers Weekly’s Narrator of the Year.

Brick has performed on film, television and radio. He appeared on stage throughout the United States in productions of Cyrano, Hamlet, Macbeth and other plays. In addition to his acting work, Brick choreographs fight sequences, and was a combatant in films including Romeo and Juliet, The Fantasticks and Robin Hood: Men in Tights. He has also been hired by Morgan Freeman to write the screenplay adaptation of Arthur C. Clarke’s Rendezvous with Rama.

Katherine Kellgren has recorded over 200 audiobooks and won four Audie Awards, three ALA Odyssey Honors, and eight AudioFile Earphones Awards. In 2011, Kellgren was named the  Best Voice in Young Adult & Fantasy, and she won the Audie award for Best Female Narrator in both 2013 and 2014.  Kellgren has also appeared onstage in London, New York and Frankfurt. She has recorded numerous plays and dramatizations of novels for the radio, including winners of the Peabody Award. She is a graduate of The London Academy of Music and Dramatic Art. In naming Kellgren a “Golden Voice,” AudioFile magazine noted that she is a "marvel with accents...she is definitely a narrator to keep an ear out for." She lives in New York City.