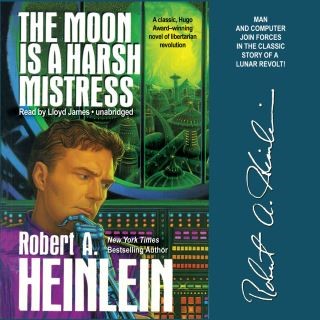 The Moon is a Harsh Mistress

Revolution is brewing on twenty-first-century Luna, a moon-based penal colony where oppressed “Loonies” are being exploited by a harsh Authority that controls it from Earth. Against all odds, a ragtag collection of dissidents has banded together in revolt, including a young female radical, an elderly academic, a one-armed computer jock, and a nearly omnipotent supercomputer named Mike, whose sentience is known only to this inner circle and who is committed to the revolution for reasons of his own.

Drawing many historical parallels with the War of Independence, Heinlein’s fourth Hugo Award–winning novel is a gripping tale bursting with politics, humanity, passion, innovative technical speculation, and a firm belief in the pursuit of human freedom.

Robert A. Heinlein was the most influential science fiction writer of his era, winning the Hugo Award for best novel a record four times. The Moon Is a Harsh Mistress was the last of these Hugo-winning novels and is widely considered his finest work.

Lloyd James (a.k.a. Sean Pratt) has been narrating since 1996 and has recorded over six hundred audiobooks. He is a seven-time winner of the AudioFile Earphones Award and has twice been a finalist for the prestigious Audie Award. His critically acclaimed performances include Elvis in the Morning by William F. Buckley Jr. and Searching for Bobby Fischer by Fred Waitzkin, among others.