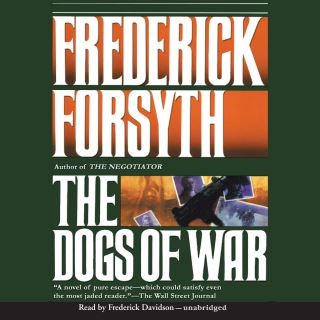 The Dogs of War

In a remote corner ofZangaro, a small republic in Africa, lies CrystalMountain. At certain times of the day the mountainemits a strange glow. Only mining magnate Sir James Manson, a shadowy titan of London's financial district, knowswhy. The mountain contains ten billion dollars'worth of the world's most valuable mineral,platinum, just waiting to be exploited. Now the only question is how to gethold of it. Sir James knows how. Unleash the dogs of war.

"Knocking off a bank or an armored truck is merely crude. Knocking off an entire republic has, I feel, a certain style." Manson is scheming a coup d'├®tat in Zangaro, a plan to invade the country with a band of savage, cold-blooded mercenaries and topple the government. The man selected to plan and carry out the mission is Cat Shannon, a thirty-three-year-old Anglo-Irishman from Nigeria. If the goal is clear, the means are not, for there are no up-to-date manuals on overthrowing governments by force. By the time he has set forth this sinister venture in all its ramifications, Frederick Forsyth has fashioned that manual and given us a classic of terror and enthrallment.

Frederick Forsyth is the #1 New York Times bestselling author of several novels, including The Day of the Jackal and The Odessa File, as well as short-story collections and a memoir. He is the winner of three Edgar Awards, and in 2012 he won the Diamond Dagger Award from the Crime Writers’ Association, a lifetime achievement award for sustained excellence. A former Air Force pilot and one-time print and television reporter for the BBC, he has had four movies and two television miniseries made from his works.

Frederick Davidson (1932–2005), also known as David Case, was one of the most prolific readers in the audiobook industry, recording more than eight hundred audiobooks in his lifetime, including over two hundred for Blackstone Audio. Born in London, he trained at the Royal Academy of Dramatic Art and performed for many years in radio plays for the British Broadcasting Company before coming to America in 1976. He received AudioFile’s Golden Voice Award and numerous Earphones Awards and was nominated for a Grammy for his readings.