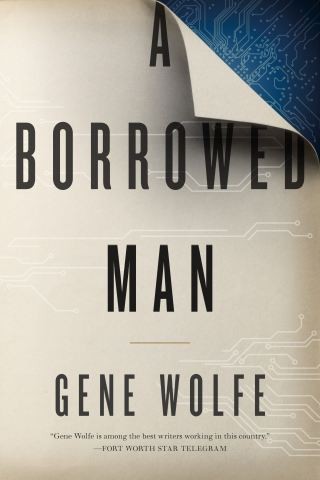 A Borrowed Man: a new science fiction novel from Gene Wolfe, the celebrated author of the Book of the New Sun series.

It is perhaps a hundred years in the future, our civilization is gone, and another is in place in North America, but it retains many familiar things and structures. Although the population is now small, there is advanced technology, there are robots, and there are clones.

E. A. Smithe is a borrowed person. He is a clone who lives on a third-tier shelf in a public library, and his personality is an uploaded recording of a deceased mystery writer. Smithe is a piece of property, not a legal human.

A wealthy patron, Colette Coldbrook, takes him from the library because he is the surviving personality of the author of Murder on Mars. A physical copy of that book was in the possession of her murdered father, and it contains an important secret, the key to immense family wealth. It is lost, and Colette is afraid of the police. She borrows Smithe to help her find the book and to find out what the secret is. And then the plot gets complicated.