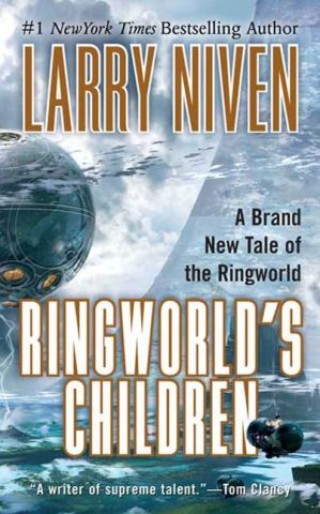 The Ringworld: a landmark engineering achievement, a flat band 3 million times the surface area of Earth, encircling a distant star. Home to trillions of inhabitants, not all of which are human, and host to amazing technological wonders, the Ringworld is unique in all of the universe.

Explorere Louis Wu, an Earth-born human who was part of the first expedition to Ringworld, becomes enmeshed in interplanetary and interspecies intrigue as war, and a powerful new weapon, threaten to tear the Ringworld apart forever. Now, the future of Ringworld lies in the actions of its children: Tunesmith, the Ghould protector; Acolyte, the exiled son of Speaker-to-Animals, and Wembleth, a strange Ringworld native with a mysterious past. All must play a dangerous in order to save Ringworld's population, and the stability of Ringworld itself.

Blending awe-inspiring science with non-stop action and fun, Ringworld's Children, the fourth installment of the multiple award-winning saga, is the perfect introduction for readers new to this New York Times bestselling series, and long-time fans of Larry Niven's Ringworld.

Larry Niven: Larry Niven is the award-winning author of the Ringworld series, along with many other science fiction masterpieces and fantasy including the Magic Goes Away series. His Beowulf's Children, co-authored with Jerry Pournelle and Steven Barnes, was a New York Times bestseller. He has received the Nebula Award, five Hugos, four Locus Awards, two Ditmars, the Prometheus, and the Robert A. Heinlein Award, among other honors. He lives in Chatsworth, California.