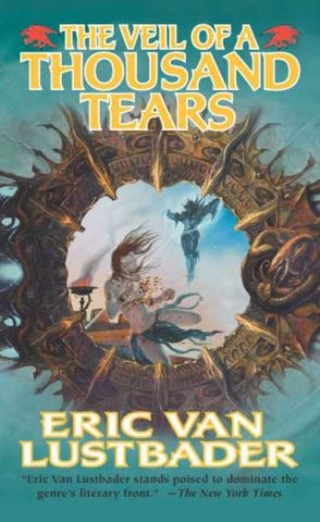 The Veil of A Thousand Tears

Having staked his claim as a master of epic fantasy with The Ring of Five Dragons, Eric Van Lustbader now returns to his world of Kundala to unearth new riches of wonder and excitement in this second volume of The Pearl saga.

With the help of her friends, Riane, the prophesied redeemer known as the Dar Sala-at, saved Kundala from annihilation, preserving natives and V'ornn invaders alike. Together, the companions avenged terrible crimes and secured the Ring of Five Dragons, but their struggles have only just begun.

The Ring averted doomsday, yet it did not open the magical Storehouse Door as expected. That sorcerous treasury remains sealed because of the spell cast by Giyan and her sister. A spell to migrate Annon Ashera's male V'ornn psyche into Riane's dying Kundalan female body. By combining them into a single being, it saved them both and fulfilled the prophecy that the Dar Sala-at would be "born at both ends of the cosmos." But the spell also breached the Abyss, releasing daemons who could wreak havoc on Kundala. The daemons were imprisoned there aeons ago by the Goddess Miina. Now the fiends must be vanquished, not only so the quest for the Pearl can continue, but to save Giyan, who has been possessed by the archdaemon Horolaggia. Their only hope is the fabled Veil of A Thousand Tears.