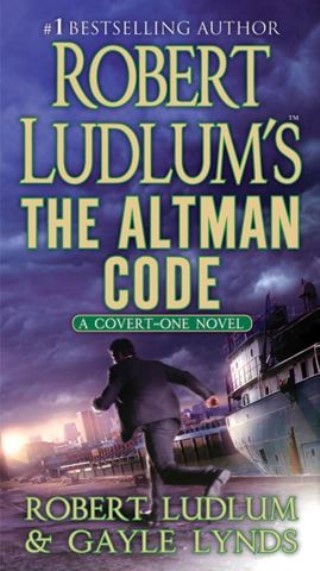 For three decades, Robert Ludlum's bestselling novels have set the standard in almost every country in the world against which all other novels of international intrigue are measured. Now The Altman Code is the latest volume in the series of novels featuring Robert Ludlum's Covert-One.

In the middle of the night, on the dark waterside docks of Shanghai, a photographer is recording cargo being secretly loaded when he's brutally killed and his camera destroyed. Shortly thereafter Covert-One director Fred Klein brings the word to the President that there's a Chinese cargo ship rumored to be carrying tons of chemicals to be used by a rogue nation to create new biological weapons. The President cannot let the ship land and risk the consequences of a new stockpile of deadly chemical weapons. Klein is ordered to get the President solid proof of what the Chinese ship is ferrying.

Covert-One agent Jon Smith is sent to rendezvous in Taiwan with another agent who has acquired the ship's true manifest. But before Smith can get the document, the two agents are ambushed, the second agent is murdered, the proof is destroyed, and Smith escapes with only his life, scant clues to mystery behind the cargo ship, and a verbal message---the President's biological father is still alive, held prisoner by the Chinese for fifty years. As the Chinese cargo ship draws ever closer to its end port, Smith must race against the clock to uncover the truth about the ship and its cargo, a truth that probes the deepest secrets of the Chinese ruling party, the faction in Washington working to undermine the elected government, and the international cabal who is thrusting the world to the very brink of war.

Robert Ludlum: Robert Ludlum (1927-2001) was the author of 25 thriller novels, including The Bourne Identity, The Bourne Supremacy and The Bourne Ultimatum--the books on which the international hit movies were based--and The Sigma Protocol. He was also the creator of the Covert-One series. Born in New York City, Ludlum received a B.A. from Wesleyan University, and before becoming an author, he was a United States Marine, a theater actor and producer.|||Gayle Lynds is the bestselling, award-winning author of several international espionage thrillers, including Masquerade, The Coil, and The Last Spymaster. A member of the Association for Intelligence Officers, she is cofounder (with David Morrell) of ITW (International Thriller Writers). She lives in Santa Barbara.

Robert Ludlum is the author of more than twenty internationally bestselling novels, including The Bourne Identity—the basis of the international hit movie--and The Scarlatti Inheritance. His books have been translated into thirty-two languages and, with over two million copies in print, are the standard by which all works of international suspense are judged.

Gayle Lynds is the coauthor of two previous Covert-One novels, The Hades Factor and The Paris Option, as well as several bestselling thrillers on her own: Masquerade, Mosaic, Mesmerized, and the forthcoming The Coil.